This document describes the "xolotl" class. This is a MATLAB class and the primary way you will interact with your simulations.

Every xolotl object has the following properties listen in this document. To access a property, use dot notation, i.e.:

You can view all the properties of a xolotl object using the built-in properties command:

approx_channels determines whether approximations to computing gating functions should be used. Look-up tables and approximations to the exponential function significantly increase computational speed, but decrease accuracy, especially at high temporal resolution in the data.

closed_loop determines whether initial conditions should be reset before a new simulation. If closed_loop is true, successive simulations will use the current state of the xolotl object (e.g. the end state of the previous simulation if you run integrate twice in a row).

dt value stores the fixed time step for outputs from simulation. Note that this is not the same as sim_dt. This value determines the number of time steps in the output vectors. If dt and sim_dt differ, the simulation vector is interpolated before being output -- useful for running ultra-high definition simulations but not saving all that data.

dt must be a integer multiple of sim_dt. If it is not, an error will be thrown.

When V_clamp is not a NaN, xolotl will assume that you are running the simulation in voltage clamp mode. V_clamp must be either:

You cannot simultaneously inject current and voltage clamp any compartment.

You cannot simultaneously inject current and voltage clamp any compartment.

When stochastic_channels is 0, it is assumed that there are sufficiently many channels of every conductance type, and that we can use a deterministic ODE to integrate the gating kinetics of every channel.

When stochastic_channels is 1, the deterministic ODE governing channel gating is replaced by a stochastic equation that is integrated using the Euler-Maruyama following the approximate Langevin formulation. With this flag, the size of the neuron determines the number of channels in every population, and thus determines the noise added onto the deterministic dynamics.

When solver_order is 0, standard solvers are used (exponential Euler). When it is 4, a Runge-Kutta 4th order method is used instead. This method is slower but more accurate.

Specify the time, in ms, for which to simulate. Make sure that t_end is an integer multiple of sim_dt

output_type determines if outputs from the integrate function should be separate matrices (0) or organized in a structure (1), or organized in a structure and enable spike-detection in C++ code (2). The 0 option is useful when you only want a few outputs or don't care about lots of variable names. The latter options are useful when it's important to keep all the output data organized. In addition, the 2 option saves memory at the expense of detail.

verbosity is an integer that controls how verbose xolotl is when running simulations. Use this value to control verbosity from different components of xolotl. verbosity uses a prime basis given by:

x.pref contains a structure that contains settings that determine the behaviour of some methods. You can change these settings temporarily by modifying this structure. To make these changes persist across sessions, edit the pref.m file.

You can also add your own data to x.pref, which your functions can use. This is a way to pass metadata and other data along with this model to other functions.

Adds a cpplab object to a xolotl object. The add method is the most important way you construct models.

xolotl.add checks that the compartment being added has a legal name using checkCompartmentName. If so, it calls the add method in the cpplab superclass.

It should produce a figure that looks something like this (the exact figure will depend on the model and your hardware): 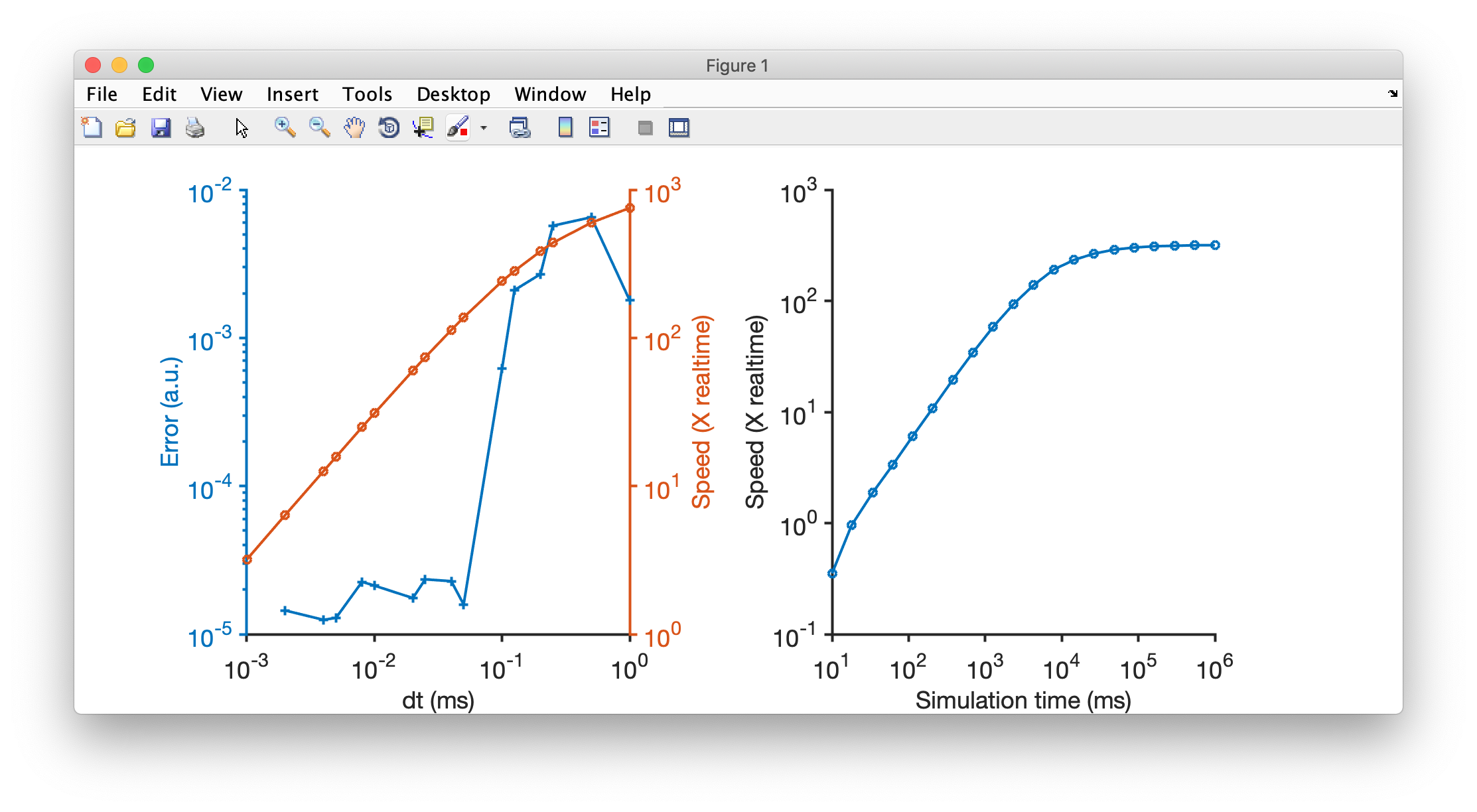 checkCompartmentName is used internally by xolotl to verify that the compartment name you are using is valid and legal. This method is called every time you add a compartment to a xolotl object.

Do not use checkCompartmentName, as it may be removed in a future release.

The following rules are enforced:

This method is called in xolotl.transpile() before transpiling takes place

A static method that cleans up all transpiled C++ and compiled binary files.

Use of this method will trigger a warning every time it is called. You do not need to use this in normal use, but can call this to force a recompile, or to delete old and unused binaries.

compiles a executable binary form a transpiled C++ file. These are stored in your xolotl directory. xolotl automatically compiles when t needs to. You can turn this

Connects two compartments with a synapse.

The following properties can be specified for most synapses:

This method supports tab completion. You should be able to press tab to get a list of compartments to connect.

This static method calculates the contributions of each current at every point in a voltage race. This is used internally in xolotl.plot to color voltage traces.

where V is a vector of voltages, I is the corresponding matrix of currents

copies a xolotl object. copy creates an identical copy of a xolotl object that can be manipulated separately. Both copies will use the same binary to integrate, unless you add a new component to one of them.

This method creates a "currentscape", or a visualization of the fractional contribution of each current at each point in time

When called with one output, no plot is created, but the raw normalized inward and outward currents are returned.

This method only works with single-compartment models.

Downloads a pre-complied binary for this model, if available.

This method computes the f-I (firing-rate vs current) curve of a single compartment model. data is a structure containing the following fields:

The following optional parameters may be specified in name-value syntax:

static method of xolotl that returns function handles that represent the gating and activation functions of a particular conductance.

conductance is a string that specifies a conductance C++ header file. The outputs are function handles that can be evaluated independently. This method is used internally in xolotl.show()

This method supports tab-completion. You should be able to press tab to get a list of conductances you can get the gating function of.

A static method that goes to the folder that contains xolotl examples.

The outputs of integrate depend on the output_type property of xolotl.

When output_type is 1 or 2, the integration is performed requesting all outputs, and these outputs are organized in a structure and named to match the names of the components in the model.

A static method that overloads the built-in loadobj method. This sets local parameters, and is useful when xolotl objects are saved to disk and loaded.

Do not use this method. This method exists so that MATLAB knows how to load xolotl objects correctly

manipulate is a method that allows you to manipulate some or all parameters in a model while visualizing its behavior.

If you want to turn off the coloring, or to hide the Calcium concentration, change your preference using:

Makes a stem plot of conductance densities in a given compartment. If the first argument is a handle to a valid axis, plots will be made there. If no axis handle is given, it will use gca instead. This function can plot onto both Cartesian and polar axes.

rebase is an internal method that configures some house-keeping settings. rebase is called every time a new xolotl object is created. rebase:

If you move a xolotl object across computers (for example, by saving it to a file and loading it in a different computer), you must call rebase to link it to the C++ files it needs.

Resets a xolotl object to some default state.

reset called without any arguments resets the model as best as it can -- voltages are set to -60 mV, Calcium in every compartment is set to the internal value, and the gating variables of every conductance are reset.

reset can also be called with a string argument, which is the name of a snapshot previously stored in the model object. Then, reset reconfigures the parameters of the model to match that snapshot. This is useful for working with a model, changing parameters, evolving it, and then coming back to where you started off from.

This method supports tab completion. You should be able to press tab and get a list of snapshots that you want to reset to.

% !!! warning reset will not change the values of I_ext and V_clamp

If called without arguments and one output, a struct containing fields for all optional arguments, options, is returned.

Otherwise, the first argument should be a xolotl object, and the latter should be either name, value keyword pairs, or a struct to specify options. Options with a NaN value are ignored, and the default is used instead.

I_min and I_max define the minimum and maximum of the tested injected current. The SpikeThreshold defines when a spike is said to occur. The voltage must cross this threshold in order for a spike to be counted. You can change the number of spikes to search for via the nSpikes option. This should be used in combination with the t_end option, which defines how long the simulation is. For example, to find the current at which your model spikes at 10 Hz, you could set t_end = 10e3 and nSpikes = 10.

A static method that runs all tests (demos/examples) in xolotl/examples. If you've just installed this, it may be a good idea to run this to make sure everything works.

This method is called during testing, and only if all tests pass is a release published.

This method displays activation functions and timescales of any conductance or synapse. If you are passing a conductance argument, subsequent calls to show will update the plot, plotting the new activation curves over the old ones, allowing you to compare different channels.

The compartment to be sliced must explicitly be a cylindrical section, i.e., it must have a defined length and radius. slice cuts the cylinder along the axis, and connects each slice with Axial synapses. This object can then be treated as a multi-compartment model, and xolotl will integrate it using the Crank-Nicholson scheme reserved for multi-compartment models.

Saves the current state of a xolotl object for future use. Snapshots act as properties of the xolotl object, so can be reset to anytime, including within other function and scopes.

Creating two snapshots with the same name will overwrite the first.

Generate a C++ file that constructs the model, integrates it, and moves parameters and data from MATLAB to C++ and back.

Manual transpiling is discouraged. xolotl will automatically transpile code for you when needed.

Static method of xolotl that uninstalls the currently installed version of xolotl. If xolotl was installed as a MATLAB toolbox, this method deletes the toolbox and removes the toolbox from the path.

Updating xolotl if installed as a MATLAB toolbox will overwrite preferences and delete compiled binaries.

view the C++ code generated by xolotl.transpile() that constructs the model and integrates it